There is a Crack in Everything

In scripture, we hear the hopeful words of Isaiah repeated forever: “I am about to create new heavens and a new earth” and “Behold, I am about to do a new thing. From Psalm 98, we hear, “Sing to the Lord a new song.” And from Saint Paul, we hear, “If anyone is in Christ, there is a new creation: everything old has passed away; see, everything has become new!” (2 Corinthians 5:17). Even in the last book of the Bible, the Book of Revelation, we hear the words, “See! I am making all things new!” (Revelation 21:5).

“Sing to the Lord a new song!”  we smile to each other. But we rarely, very rarely, actually enjoy any new song (especially in church!). The old ones are just fine by us! In fact, we get angry at the new songs. Why can’t we just sing the same old stuff? We get angry at those bringing us new songs, and we fire them.

The reason is this. For almost everything new coming into our lives, something old has to depart. Something old has to pass away. Leonard Cohen sang about it like this: “It looks like freedom, but it feels like death. It’s something in between, I guess. It’s closing time.” Those departures, those deaths, are not pleasant. They are painful. They make us sad; and sometimes the deaths make us angry.

What a week this has been. On this particular Sunday of the year, a lot of people have been wondering what I would say in today’ sermon  -- including me.

On the day after the election, I wrote that this past year’s campaign has been about feeling: the lack of it, on one hand, and especially the anger of it on the other hand. That anger, so incessantly inflamed and exploited, will not go away soon. It is arising anew within allies now, and even friends and colleagues are turning against each other. Anger, and downright meanness have somehow been endorsed in this election. Racist comment and misogynist comment, and fear-of-the-foreigner comment, have been loosely and wickedly strewn all over the country.

People have said that they take the comments and character of our president-elect “seriously but not literally.” Well, that’s a phrase I usually like. I say that about the Bible a lot: “take it seriously but not always literally.” But words matter. One cannot throw words into the public arena and then pretend they don’t exist, or pretend they were a joke. It takes a long time to repair mean words.

I do not think that such behavior is the new heaven and the new earth that God is talking about in the Bible. Biblical virtues take a long time to develop. Character takes a long time to build.

Yes, what a week. I understand that new life always seems to involve something old passing away. But I would rather be preaching about the death of my hero, Leonard Cohen, the poet and musician who died this past week. He was able somehow to communicate the deep light of life that appears even in deep darkness. God resides in the darkness, in the cracks, in the beautiful losers. He sang, “Everybody knows the war is over; everybody knows the good guys lost. Everybody knows the fight is fixed; the poor stay poor, the rich get rich. That’s how it goes. Everybody knows.” 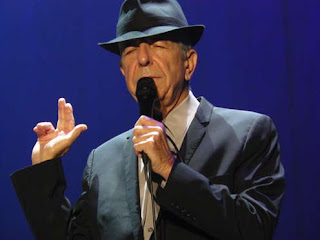 Yes, I would rather be preaching about other deaths.  Like the death of our dear, dear parishioner, Ruth Vaught, another one of God’s humble and serving saints. She was about service, she was about grace and hospitality. She insisted that she be called “Old Woman,” and I admit I could never call her that. But today, in the kingdom of heaven, she is a New Woman. She is a new creation in Christ.

I would rather be preaching about the honor of military veterans, on this Sunday after Veterans Day, remembering faithful men and women who served our country, often without accolades or applause at all. I salute the service of my own father, who served in the United States Air Force, and who is the reason I myself was born on an Air Force Base.

Yes, I do realize that old things have to die as new things are born. This is actually the reason I could never support the slogan, “Make America Great Again.” I can’t go back to the 1950’s, the decade in which I was born, or even to the 60’s, the 70’s, the 80’s, when I was growing up. Hey! I love those old songs, too! But the phrase of Thomas Wolfe rings much truer to me: “You Can’t Go Home Again.” The world changes, the world evolves; and with the grace and love of God, the world usually, over time, changes for the better.

As a Christian, I am for, I am for, so much more. I am for the equal treatment of God’s great diversity of people in this country, for the dignity of blacks and whites, Christians, Jews and Muslims. We call it dignity and respect for God’s creation. Christians are for other great new things in our country, too. I am for same-sex marriage. I am for women’s reproductive rights. I am for the welcome of immigrants.

This country has accomplished much in moving towards that new heaven and new earth that God has for us.

Another thing must be said today. I must speak to white men, in particular. Here is what I say to white men: Be a man. Be a man. A good man does not act crudely toward women, and a good man honors the power of women. I know many white men have lost jobs in the past twenty years. But so has everyone. Nothing makes you any more distinctive than other demographic groups. You will lose to women sometimes, and to black men sometimes. So goes life. I am a white man, and I myself have had those experiences. Usually that defeat has come fairly and evenly. So goes life.

I have learned – from Leonard Cohen maybe! – that it is loss, it is loss, that enables my new life to flourish. “There is a crack in everything; that’s how the light gets in,” he sang. Hey, wait! Those are the words of Jesus: “the person who loses their life, finds it.” And they are also the words of Saint Paul, who said that “God’s grace is made perfect in weakness.”

The Christian claim is that God always calls us to the future: to new life, new heavens and a new earth.

Two weeks ago, I preached at a most sad service, the funeral of someone who had committed suicide. Most of us know that death is often incomprehensible. We can never answer the “Why” questions surrounding death. And deaths by suicide are even more incomprehensible. The more data we discover, the more we realize what we don’t know. We will never be able to analyze completely. We will never know.

The gist of what I said at that suicide funeral was this: God never puts things back together the way they were exactly. God never restores the old. Instead, God creates the new. We always want the old back. But we can’t go back. We can only go forward. Behold, says our God, I create the new.

Our call, our vocation, is to be part of what God is creating. That new creation is always bigger than any one person, no matter who that person is.

I am glad to be in church today. This particular parish, this Cathedral community, wants to be part of God’s new creation, but we know that God’s new creation is always about service. We are named for St. Philip, a deacon, one who serves. If there is any one Bible verse that should define us, that verse is Luke 22:27,  “I am among you as one who serves.” If we ever write any words on the front point of the Cathedral, the overlook,  I want the words to be those of Jesus: “I am among you as one who serves.”

One might say that institutions are under severe critique and suspicion this week. Political institutions, government, the establishment, the church! In this day, however, I am glad, and proud, to be in a Christian Church, and in this particular church, the Cathedral Parish of St. Philip. We belong to a communion that is larger, and older, and more expansive even than our own country. We gather together because we know that God is faithful when we make the right choices, and God is faithful when we make the wrong choices.

We serve for the long term, because we know that virtue takes a lifetime to create. Good character is built over a lifetime. We are trying to be part of God’s new creation, long term. We do not shame people in this community. We do not intentionally embarrass people. We respect all of God’s creation here. We dignify all people. Like Cohen, “we tell the truth, we didn’t come to fool ya.” We know we have cracks. We know we are weak. But we know God is strong.

We allow many voices here, but we do not let people rest simply upon their own opinions.  We speak another opinion, too, the one that is for the common good, the long-term good, the virtuous good, the new creation good of God. We are the Body of Christ, the one who said, “I am among you as one who serves.” We want to be that light –the light of the world! – that is getting in through the cracks. That is why we sing our song. That is why, even at the grave, we make our song: “Hallelujah, Hallelujah, Hallelujah.”

The Very Rev. Samuel G. Candler
Dean of the Cathedral of St. Philip

This sermon was preached at the Cathedral of St. Philip, November 13, 2016.